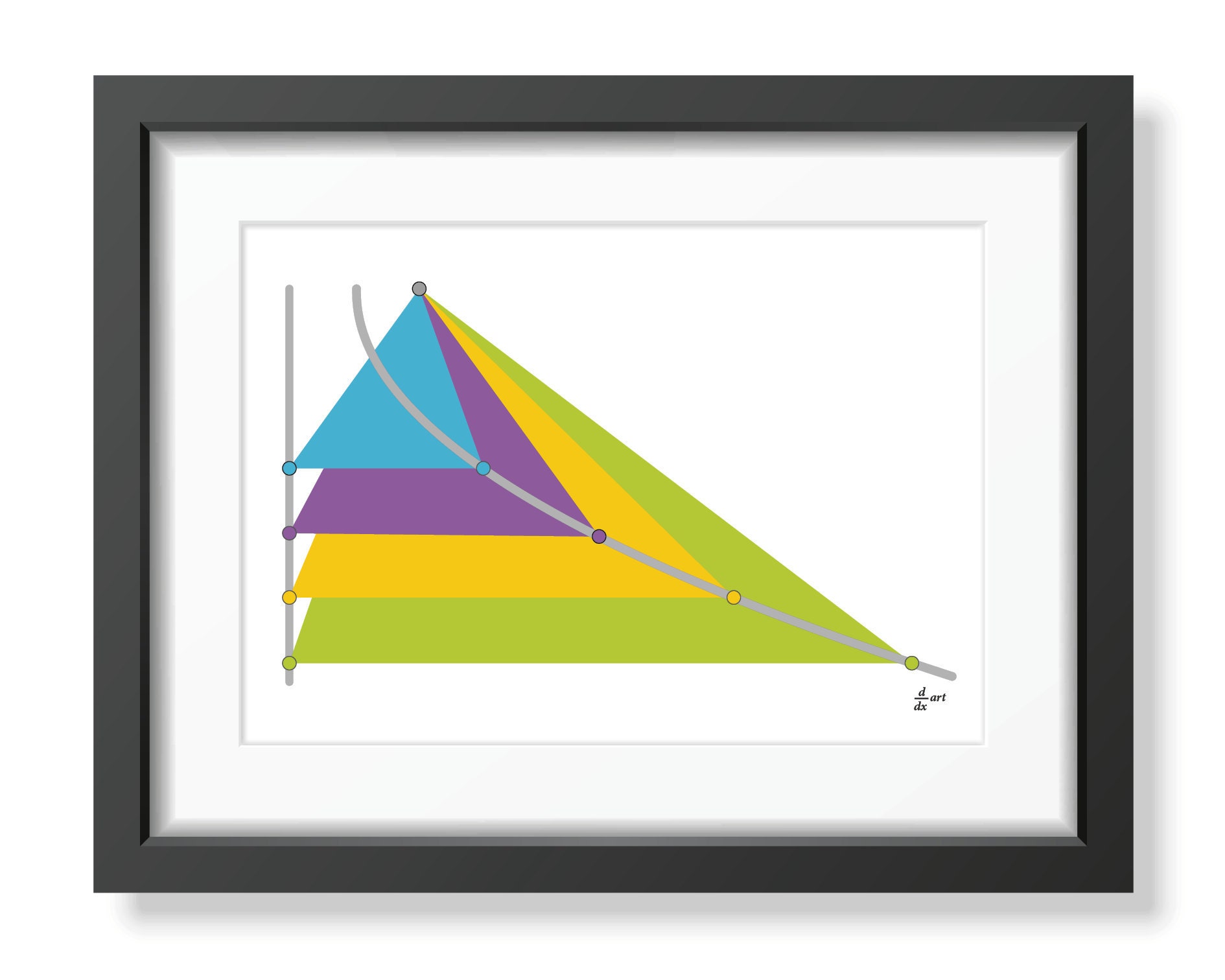 I’ve been playing with parabolas for a few weeks now. Or perhaps I should say I’ve been playing with ‘the parabola’ since there is really only one, rescaled for a thousand different uses. Parabolas are everywhere in daily life – car headlights, flashlights and spotlights, the satellite dish on the side of the house, the microwave aerial that passed your phone signal from tower to tower, massive radio telescopes, directional microphones. And the reason is that the parabola displays that mysterious quality which makes mathematics so fascinating – where something simple and fairly obvious in mathematical terms turns out to have amazing qualities.

The trouble is that most of the ways I tried to express the essential qualities of the parabola turned out to look like demented alien spiders or to lack any dynamism as a result of being too symmetrical. The resulting design is pretty much bare-bones, which is anyway what I usually strive for. The curve is half a parabola, allowing the design to sweep across the space and reducing the amount of detail required. The triangles are visibly isosceles, showing that their apex, which is a point on the curve, is equally distant from the central dot and the grey line. That is the simple quality of the parabola.

And the parabola really is quite simple. At its most straightforward it’s just the graph of y=x^2 or more properly, y=ax^2, where ‘a’ is any number you care to choose. All the curves in the illustration below are parabolas, it’s just they are fatter or slimmer according to the value of ‘a’ chosen. 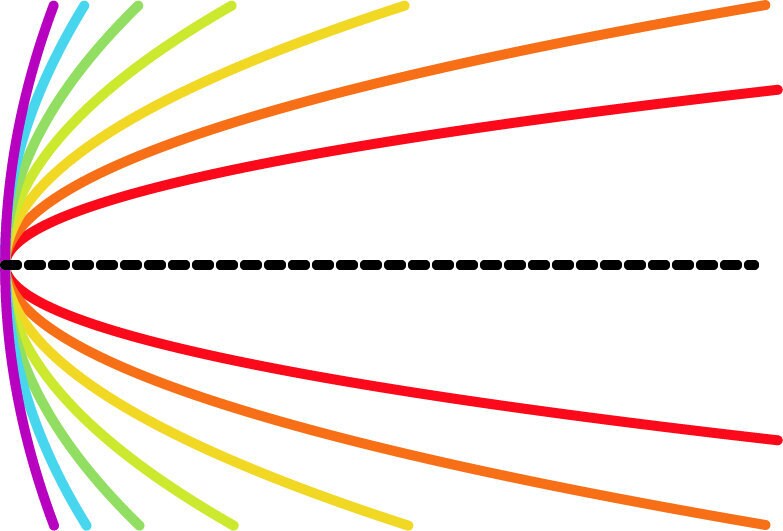 And the amazing quality? It’s that each of those curves has its own unique point called its ‘focus’ and any line coming into the bowl of the parabola parallel to the y axis (the black dotted line) will be reflected to the focus… 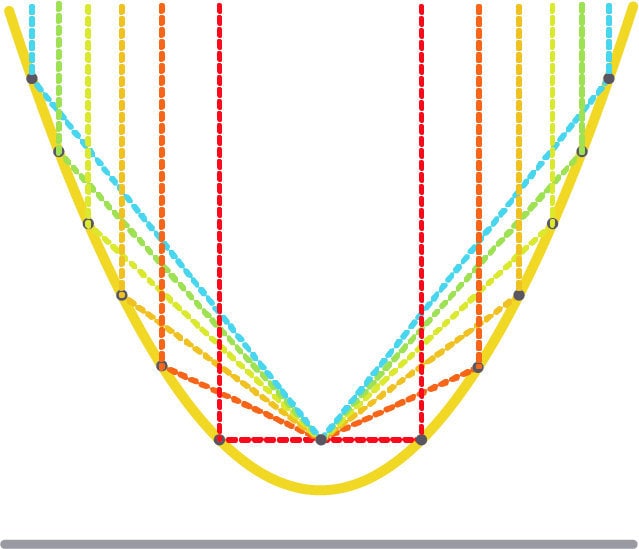 The practical application of that is that if you make a solid symmetrical bowl out of a suitably reflective material, where every cross-section through the centre is the same parabola, then light, radio waves, sound or whatever form of radiation you have designed for which comes in parallel to that y axis will be gathered and concentrated at the point of focus. So the faint signals from a satellite hundreds of miles away in orbit can be gathered by a relatively small dish and redirected to a receiver placed at the point of focus. Take away that dish and there is too little signal for the receiver to register.

And to complete the neat trick, the inverse applies. If you place something that radiates light, radio waves, sound etc at the point of focus, then your dish will send it out in a tight beam rather than allowing it to spread out and dissipate its power over a wide area – hence flashlights and car headlights.

The fly in the ointment is that if you want a parabola to focus in a particular spot then you have to know how to build one with that particular quality. It’s not hard, either mathematically or on paper, but to understand either method you have to start with a different, practical, definition of the parabola.

The parabola is defined by two features. First is a straight line called the directrix, the second is a point called the ‘focus’. If you put those two onto a flat plane, say a piece of paper, then the parabola that they dictate is a line consisting of all the points on the paper which are equal in distance from the directrix and the focus, like this… 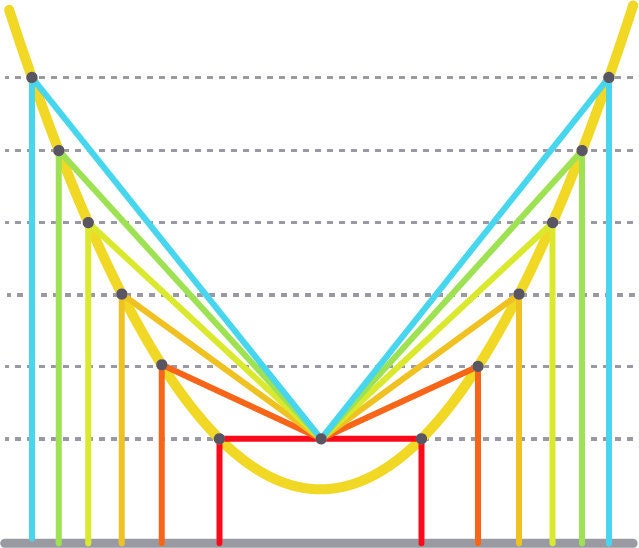 The illustration shows how a parabola can be constructed manually. The grey line is the directrix, the point where all the lines converge is the focus – both are placed before any of the lines are created. Once focus and directrix are placed according to choice, a series of lines parallel to the directrix is drawn. Using a compass, measure the distance from one of the parallel lines to the directrix. Now place the point of the compass on the focus and use the compass to mark the place on the parallel line you measured which is the same distance you just measured. That is a point on the parabola for that particular directrix and focus.

Mathematically, as mentioned above, the actual curve of the parabola is defined by the expression

and equation of the straight line of the directrix

The point on the parabola closest to the focus and directrix will be (0,0), which is 1/4a away from both, where

is equal to zero. That done, you can take those two definitions, 1/4a and y=-1/4a, and create different scales of parabola, knowing where the focus will lie and how to use the focus and directrix to produce the desired shape.